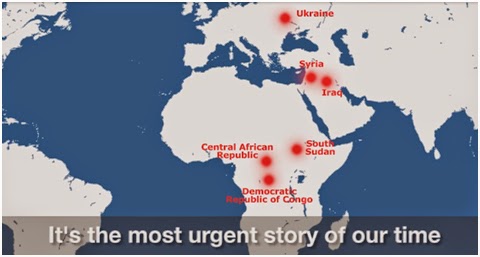 Right now Australia for UNHCR is facing an unprecedented number of Level 3 emergencies in Syria, South Sudan, CAR and now Iraq. I am sure many of you were moved like me by the terrible images of people on Sinjar mountain scrambling to get into the helicopters to lift them to safety. UNHCR estimates there are about 1.2 million displaced people as a result of this current fighting In Iraq.

Meanwhile in Syria there are 10.8 million people in need of humanitarian assistance, of which 6.5 million are displaced. In addition to this, there are 2.8 million Syrian refugees in neighboring countries.


There are an estimated 1.5 million displaced people within South Sudan and 425,000 South Sudanese finding refuge in neighbouring countries .To date UNHCR has only 26% of its required funded need to meet emergency needs. And now the UN has warned of the impending threat of famine with one million people at risk. These are extraordinary times which call for extraordinary support.

I know that these numbers of people can seem daunting. However time and time again we have seen the impact of practical, well placed support.  Some examples include therapeutic feeding kits to respond to the high rates of malnutrition being seen on arriving children, all-season tents to provide shelter for those people forced from their homes, and emergency survival kits that contain sleeping mats, blankets, kitchen sets to cook the dry rations and soap to cut down infection.

Two months ago I was in the Democratic Republic of the Congo – a country with a terrible record of violence against women. But with the Lord’s Resistance Army (LRA) and other militias currently in retreat there are some green shoots of hope. If you could personify that hope it would be in the form of Sister Angelique Naimaka, the 2013 recipient of UNHCR’s highest humanitarian award – the Nansen Refugee Award. Sister Angelique lives in a remote settlement called Dungu in the North Kivu province, near the South Sudan border and previously the heart of operations for the notorious LRA.

Sister Angélique herself has been displaced, dodged bullets and survived in the bush. She told me that it was this personal experience that motivated her to help displaced women realising that as a displaced person you have nothing unless someone gives to you.

Sister Angélique has provided a safe refuge for many victims of the LRA and with UNHCR’s support runs literacy classes; vocational training and income generating activities to help the victims of sexual violence reintegrate into society and support themselves and their children.

When I asked Sister Angélique about whether she felt overwhelmed by her mission she replied, “if I can help one woman restart her life I consider that a success.”

With UNHCR support, her program has now already helped over 2000 women and girls recover their health, their confidence and develop skills to life dignified and independent lives.

Sister Angélique is just one of the millions of humanitarians now helping many refugees and displaced worldwide –and that of course now includes you and your support today.