Women Together: Conflict, Courage and Hope in the Congo

Five years ago, Major General Patrick Cammaert, the Deputy Force Commander of the United Nations Mission to the Democratic Republic of the Congo (DRC) despairing of the use of rape as a weapon of war declared, “It is now more dangerous to be a woman than to be a soldier in modern wars.”

It was as shocking to hear then, as it is to recount now. For many women and girls in the conflict-prone eastern provinces of DRC, sexual violence has become a sad reality of everyday life. Some 350 rapes are reported every week, yet this is only a fraction of the true number committed.

But today as we mark the UN International Day of Non-Violence, there are some small green shoots of hope.  After decades of brutal civil war and atrocities wrought on the entire civilian population, the DRC has for the first time in years some relative stability.

And in a world where minds are rightly focused on devastating suffering in Iraq, Syria and South Sudan, the current situation in DRC represents a rare window of opportunity for change that we cannot let slip.

In June, all UN member states voted unanimously to adopt Security Council Resolution 2106 on conflict-related sexual violence. Building on a series of previous UN Resolutions on Women, Security and Conflict, Resolution 2106 seeks to put substance to the words and reinforces the work that the UN Refugee Agency (UNHCR) and others are doing to implement prevention and support programs on the ground for victims of sexual violence.

It is also an opportunity to push forward on the strong messages being sent by the Australian Government. The Foreign Minister, Julie Bishop recently addressed the Australian Dialogue on Sexual Violence in Conflict, saying, “we cannot accept a world where women are considered collateral damage of war. We have to work together – this is a matter for the good minds in all sectors – legal, military, government, policing, humanitarian, diplomatic, judicial and NGOs. We need practical, tangible actions.”

It is a call echoed by former UK Foreign Secretary William Hague and UNHCR’s Special Envoy Angelina Jolie who led the specially convened Global Summit in London in June to End Sexual Violence in Conflict and where Jolie called for the world to work together for women in the DRC. The Australian Army’s Lieutenant General David Morrison also addressed the Summit, lamenting  “we live in a world where the squandering of women's talent, the traducing of their potential, is a global disgrace.”

As I often point out to the refugee and displaced women I speak to in conflict zones, violence against women is a problem across the world, including in Australia. However in our country we are lucky to have the support of government and legal and social systems to support victims of violence. Vulnerable refugees and displaced women have neither the protection of their own country or often their host country and must rely on the support of humanitarian bodies like UNHCR.

In the DRC we’re talking about violence against women and girls happening on an extreme scale because of a collapse of rule of law and government and infrastructure. It is in this vacuum that UNHCR is funding a number of grassroots programs.

One of those programs is headed up by Sister Angelique Namaika a catholic nun who operates a safe haven for women and children in Dungu, Orientale province in northeastern DRC. Here, nearly everyone I spoke to when I visited recently has been a victim of the notorious militia group the Lord’s Resistance Army (LRA).

Supported by UNHCR, Sister Angelique’s group ‘La maison des femmes’ runs a bakery, literacy classes, psychosocial counseling for victims of sexual violence, and also an agricultural project that literally embodies those green shoots of hope springing up in the DRC.

In a remote agricultural clearing 80 women toil together on individual plots of land growing maize, rice and cassava. It is tough work but also restorative. As one woman, who had two sons kidnapped by the LRA - one returning to her with his right arm chopped off and the other dead - tells me “I thought I would die with sadness but now with these other women for the first time I can think ahead.” Woman after woman told me of the importance of this support, the opportunity to earn a livelihood and to be independent.

Further east in the beautiful but still dangerous hills of North Kivu’s Masisi country where the most active militia group the M23 retreated to last year, I met young girls aged as young as 12 years old, who had been rescued by UNHCR from one of the town’s many brothels.  They were just little schoolgirls. According to NGOs in the area, prostitution and survival sex has gone hand in hand with conflict and the expansion of mining in the area.

Believing prevention is the key, UNHCR is now focusing on sensitization programs working with local communities to bring awareness about women and girls rights. These include street theatre, comic books and even a TV Soap series that is widely watched in DRC about the challenges a girls’ soccer team faces with sub themes of sexual harassment and violence, forced marriages and survivor sex.

In a discussion group I attended, after a film on rape was shown, the audience was asked for their reactions. One of the local men stood up and said, very honestly, “I know now that it’s not right to rape women.” I heard a woman say that she now understood that rapists can be prosecuted. This might seem small, but these are real signs of change.

As the Australian Government calls for new ways for government and the private sector to engage together to promote foreign aid initiatives we look to opportunities to work with government and other Australian actors in DRC including the mining sector to help stop the endemic of sexual violence and to ensure men and women can live in dignity and safety.

Our country, through more than 80,000 individual Australians who donate to Australia for UNHCR gives more to UNHCR on a per capita basis from the private sector than any other country. While the domestic asylum debate dominates the headlines we should not forget that Australians in their thousands are actively supporting women in places like DRC with tangible and practical help.

This comes at the same time that both the Australian government and global leaders have highlighted this issue as one of the most compelling issues women face globally right now. Now, on the International Day of Non-Violence, we should grasp this unique moment to help the entire Congolese nation take a stand against the tragic culture of rape that has pervaded it for so long.


Women Together: Conflict, Courage and Hope is a photographic exhibition taken during a recent Australia for UNHCR mission to the DRC. The exhibition is at the Nishi Gallery, 17 Kendall Lane, New Acton, ACT and will run to Sunday 5 October
Posted by Unknown at 12:31 PM 1,220 comments: 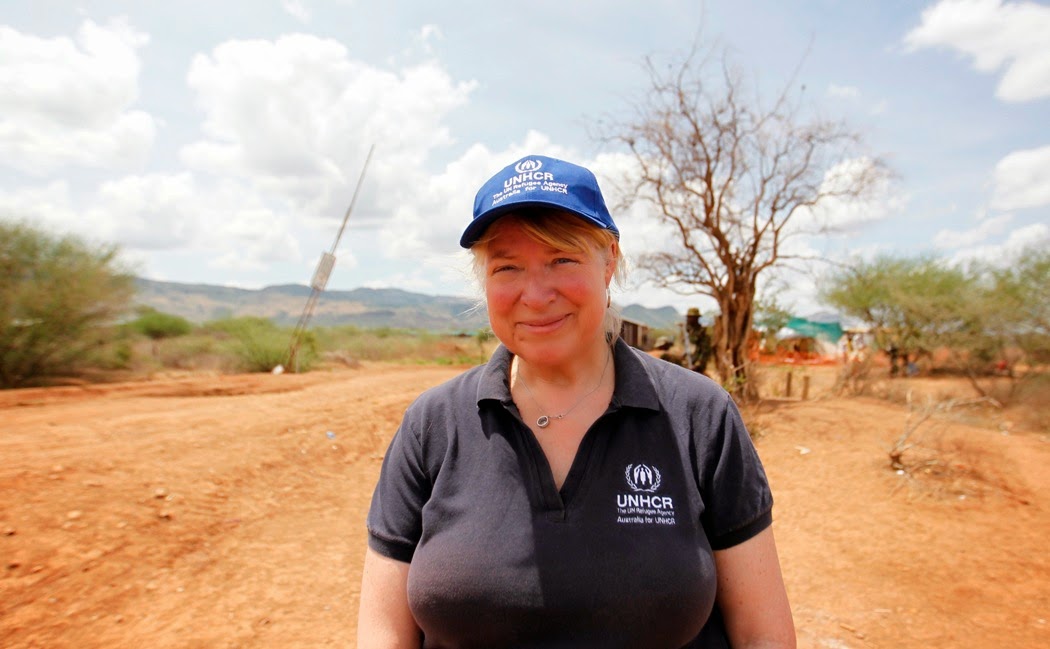 8 March is International Women’s Day, and this year, to celebrate women and their achievements across the world, we want to introduce to you just one of the many inspiring women that work for UNHCR.

Dr Ana Calvo currently lives in Jordan and works as the Public Health Officer at Zaatari Refugee Camp in Jordan – the second largest refugee camp in the world. We spoke to her about her hard work to help Syrian refugees.


What is your background?

I’m Spanish and a medical doctor by training. I have worked in the aftermath of many emergencies, both after natural disasters and when populations have been forced to flee due to conflict. I’ve spent time in many countries such as Mozambique, Colombia, Afghanistan, Myanmar and Kosovo. Basically, any situation where people suddenly have to flee their homes I have been there.