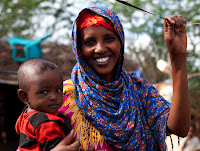 Issues around the situation of refugees and displaced people can sometimes appear insurmountable. The Safe Mother and Baby Program which has at its heart the Clean Delivery Kit is an example that big problems sometimes do have simple solutions.
Naomi Steer
Visit www.unrefugees.org.au/MaternalHealth to find out more about UNHCR Programs. To show your support for refugee women this Mother’s Day go to www.unrefugees.org.au/MothersDay.
1. Save the Children “State of the World’s Mothers”, 2011
2. WHO Publication Maternal Mortality Fact Sheet 348, November 2010.
Posted by Unknown at 5:30 PM 197 comments: