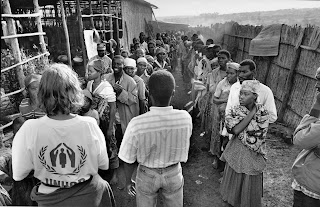 60 years of international protection and assistance for refugees
2011 marks the 60th anniversary of UNHCR and also of the Convention relating to the Status of Refugees – the key legal instrument underpinning the rights of refugees and the obligations of state parties to provide asylum.
Australia was one of the founding members of UNHCR and also one of the first states to sign up to the Convention. But the world has changed dramatically since the Convention was formulated.
Speaking at Australia for UNHCR’s World Refugee Day Breakfast last Friday, Australia for UNHCR’s Chair, John Denton, speculated about whether the “well of compassion” that led to Australia’s support for the Convention 60 years ago, had perhaps almost disappeared.
I would like to think not. But the ongoing debate about refugees and asylum seekers continues to underlie misconceptions about why people flee their homes and countries looking for safe refuge elsewhere.
This Refugee Week in Australia, SBS is screening a new three part series called Go Back to Where You Came From. According to the SBS publicity, Go Back to Where You Came From follows six ordinary Australians of varying ages and backgrounds, who agree to challenge their preconceived notions about refugees and asylum seekers by embarking on a confronting 25 day journey.
By chance I was in Kakuma Refugee Camp (one of the locations for the TV series) a week before their film crew arrived. Australia for UNHCR has funded a number of projects in Kakuma. Refugees and UNHCR staff wanted to know more about these other Australians who were soon to visit the camp. At first they were confused when I tried to explain what a ‘reality TV/ documentary’ was and that some of the Australians coming may not be very supportive of refugees.
However, after considering it, everyone was surprisingly open and positive. “Let them come, let them see how we live, how we have to survive here, and then they will change their mind.”
I don’t know how this experience did in fact change the way these Australians saw things (we will have to watch the series) but I am convinced that the more we are able to encourage direct contact and personal engagement with refugees then greater understanding and compassion will follow. 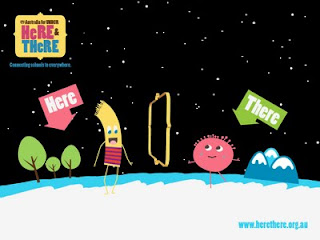 In line with this belief, on World Refugee Day Australia for UNHCR is launching a unique initiative aimed at linking up Australian students with refugees via Skype.
The project, Here & There, will be a world first, making possible a real-time video cross between an Australian school and a refugee school in Nakivale Refugee Settlement in south-west Uganda.
Using Skype technology, students in both countries will be able to connect their classrooms, ask each other questions and work together on a creative project to learn about each other’s lives. The project aims to raise awareness among young Australians about the issues facing refugees of their own age, many of whom have spent their childhoods in refugee camps.
It also aims to open new opportunities for refugees. As Gode Migerano, one of our guest speakers at our World Refugee Day Breakfast and himself a refugee said, “I would have loved to have this opportunity when I was living in a refugee camp as a young teenager. It would have opened the world to me.”
To find about more about the project and how you might be involved go to herethere.org.au
Posted by Unknown at 1:23 PM 316 comments: